Bob Klanac: Welcome to the 2017 Presentation Summit podcast where we interview the speakers and presenters who will make this year’s conference both entertaining and educational for our attendees.

My name is Bob Klanac and in this episode, we’ll be speaking to Dr. Nick Morgan.

Nick’s going to talk today about learning the power cues for turning yourself into an intentional, charismatic and convincing presenter. Nick, thanks for doing this podcast for us. Your expertise is renown in the industry in terms of being able to coach people on proper communication and presenting.

At the conference you’re going to be speaking on power cues for turning yourself into an intentional, charismatic and convincing presenter. 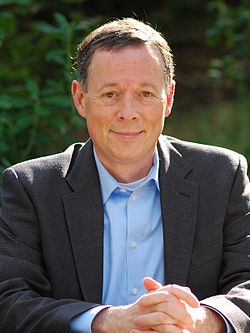 Dr. Nick Morgan: Sure. What’s happened in the last decade or so is that a lot of the kind of folk wisdom and rules of thumb and things that coaches like me might say about what works in public speaking has been, in some cases, overturned and in some cases reinforced by constant advances in neuroscience.

And so what I was doing in the book was going through the relevant neuroscience and saying what makes sense in terms of communication? What actually works? And that’s what I’m going to be talking about.

The big surprise, if you will, is that communications, it turns out, is largely unconscious between humans. And some of that is good because it means we’ve got this vast unconscious mind, we can handle 11 million bits of information a second with the unconscious mind.

So 11 million to 40 there’s no context. And, as a result, most of the hard work that’s done between people when they communicate is unconscious.

As I said, that’s a good thing in some ways because it means you don’t have to worry about it, but in other ways, it means you do have to worry about it. And that’s one of the areas that I focus on, public speaking, of course, because just to give a very simple example, the vast majority of people get nervous when they stand up to speak in public with group sizes of more than three people.

What happens when you get nervous is you send out mixed signals. So your body language, that unconscious part, sends out signals, “Hey, there’s terror in the room, watch out. Danger! Danger! Danger!” And then your conscious mind is trying to say something nice about whatever your topic is. That conflict between the two is resolved always in the unconscious mind and is resolved on the side of danger for obvious survival reasons.

Bob: Yeah, it sounds like it and we’ve seen it. What I find fascinating sometimes is to see people who are public speaking yet they don’t seem to appreciate what you’ve just said. I suppose that’s where you come in in terms of that, but how do you convince someone that perhaps they need this?

Nick: I usually start with audiences with a very simple question. I say, “So what percentage of your time when you’re getting ready to give a speech do you spend on the content versus the body language? Give it to me in terms of 100 to zero.”

The next thing I say then, “Well, that’s interesting because when those two are aligned, you can be an effective communicator.” If your body language is having the same conversation as your content, it’s all good. But if they’re having two different conversations as back to our original example, the simple one of nerves versus whatever you’re trying to say, the body language always trumps the content. It always wins out over the content. So all your carefully prepared slides and ideas and thoughts and utterances go out the window and what people remember is the body language.

Don’t walk out there and fidget and get happy feet and look nervous and have that second conversation be something along the lines of, “Well, I look like somebody who knows what he’s talking about, but actually I’m terrified.” It’s not a good conversation. Why have that conversation with the audience?

Bob: Exactly. As I saw it, it goes back to even the Kennedy-Nixon debate back in the early 60s when the effect of the people who listened to him said that Nixon sounded best, but people who watched it saw that Kennedy using his body language and his confidence won the debate.

Nick: Yes. That’s a classic example. You’re absolutely right that the research afterwards showed that people who listened to Kennedy on the radio thought Nixon had won because he was a smart guy and he had his facts. He was used to debating.

Kennedy was actually a little less experienced and a bit more hesitant in the debate. But Nixon was shifty-eyed and sweaty and had the 5:00 o’clock shadow, he hadn’t shaved just before he went on. The result was he looked vaguely criminal and Kennedy looked suave and sophisticated and cool and he won hands down by anybody who’d watched the TV. So that’s a classic example. Because Nixon didn’t think enough about what was that second body language conversation, he left it to chance and chance didn’t favor him in that case.

Bob: Can you think of any current examples where body language has defeated the content?

Nick: I spent a long year and a half commenting for CNN on first, the Republican primary debts, and then the presidential ones between Clinton and Trump in the American Presidential Election. I shouldn’t get into these politics because they’re so fractured and so polarized, but let’s just say from a body language point of view, Trump just destroyed the competition in the primaries. And in fact, I will say this, it’s the one accurate prognostication I think I’ve made in the political world. I said at the very beginning after the first debate I saw Trump in, I said, “Trump won that one hands down. He sucked all the air out of the room. He completely dominated his Republican rivals.”

Bob: Yeah, but you were right.

Nick: My one chance to be 100 percent accurate and I blew it!

Bob: I think you still got a career ahead of you there, Nick. Your new book coming out is called The Virtual Communicator. Can you speak about that?

Nick: Sure. One of the things that I get asked about, in fact, the first question almost every time I give a speech on body language that I get at the end of talk is somebody will say something along the lines of, “Well, I manage six teams across the globe and we never see each other. And so this talk about body language is fascinating, thank you very much, but how do you manage people that you never see? How do you communicate effectively with people who you only communicate with in the virtual world?”

That question got asked to me enough times so I thought I better write a book about it. So I have been studying the latest research and trying to figure out how the book can help people who are faced with that conundrum. Because the basic news is very bad.

They didn’t know the important parts were emotional and had to do with a twitch of an eye or the sound of a voice and various other things that we could get into. The details are fascinating. But there are all kinds of things that are handled by the unconscious mind and those get stripped out mostly by modern digital communication.

And as a result, modern digital communication has two huge problems. One is it’s really boring for people because the emotion is taken out, and the other is that it’s difficult for people to make good decisions in the digital space because once you take the emotion out, we make our decisions based on emotion.

And this is part of a larger discussion so I’m moving too fast through it probably. But the point is that the virtual world really hampers our communications as they exist now. And so the book is about how to put back in effective coping techniques so that you can communicate effectively in the virtual space and not get trolled or not accidentally troll somebody else and so on and so forth.

Bob: Not to, of course, give away the book, but what are some examples? What are some ways, briefly if you could, that you can actually put the humanity back into digital communications?

Nick: Yes, you can. It takes some training and some getting used to, but there are some surprisingly simple techniques that do help. They help mitigate the issue. For example, just to give your listeners something that’s probably a very common occurrence in their lives, if they’ve ever communicated with the team via an audio conference. How many people have worked with a team that’s spread all over the country, all over the globe and so you have a regular meeting or a weekly meeting or something along those lines of your audio conference?

And what happens is people don’t do what they do automatically when you’re sitting there face to face. They don’t tell you how they’re feeling really. And so you can suggest something to them and actually they’re having a really crappy day and their kid is sick and they were late getting the babysitter, it’s a rotten day and that just kind of interferes with their ability to focus and to make a good decision.

And they sort of react negatively to whatever it is you’re proposing and you don’t know why. And it kind of makes you a little bit angry, but you don’t want to say anything. And as a result of that audio conference, then the relationship on the team is made a little bit worse that you don’t get your job done.

That kind of thing would be handled very simply face to face because people look at each other and one person would say to the other, “Hey, you look kind of down today, what’s up?” And you quickly dispense with that.

But that doesn’t happen automatically on an audio conference. And so a very simple technique is to institute at the beginning of the conference an emotional check-in where people are given permission one way or another to say how they’re really feeling and what’s really going on. And yet people tend not to do that, according to my research on audio conferences. It’s a very simple way of putting back the chitchat in which happens automatically face to face.

Bob: Right. That’s fascinating and Nick, I’m going to be interested to read about the book. It’s coming out, published by Harvard Business Press, I gather, next year?

Nick: That’s the working title, stayed tuned. If we can come up with a sexier, more fun title, we will, but at the moment it’s just called The Virtual Communicator.

Bob: Okay, wonderful. Nick, thank you so much for your time. I’m looking forward to seeing you at the Presentation Summit.

Nick: It’s great pleasure to chat with you. Thanks, Bob and I’m looking forward to going down to Florida in the fall. It should be great.

Bob: Sounds great. Thanks again for your time, Nick.

Bob: If you want to find out more about Nick, you can visit his website www.publicwords.com or you can see him live at the Presentation Summit, September 24-27, 2017 in Clearwater Beach, Florida. To learn more and register, go to www.presentationsummit.com.