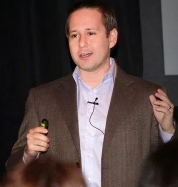 Nolan Haims: Yeah, that’s certainly the case. That’s where we’re going. When I train, we do a whole section on reducing literally the number of words and then also cognitively reducing how people perceive there being so many words on a screen.

But I always introduce it by putting up a slide on the screen that says “nobody reads everything you write. Get over it.” And the reactions go from yeah, you’re right about that or shocked.

People say, “What do you mean? That 50 page report I wrote for my client, they didn’t read it all?” No, of course not. You don’t read it all. We’re in this place of we just don’t have enough time and there’s this firehose of information not just from business colleagues and clients and everything, but online.

We’re fighting against alternatives like Facebook and kind of like that. So basically you have to say whatever it is you need to say as quickly as possible with as few words as possible. Unless we’re doing the world or novels, there’s simply no time for people to read all those words.

Bob: It’s very, very true. What led you to see that?

Nolan:  Just living in the world and being aware of it. I used to work at Edelman, which is the world’s largest independent PR firm and one of the things we were responsible for was new business pitching for this huge New York office, 800 people.

While I was there, I oversaw about 500 new business pitches. And people are spending weeks and weeks, words and things and crafting these slides, not really understanding that the person on the other side of this is not as invested.

Yes, it’s millions of dollars worth of business in some cases, but they’re reading twelve pitches. So we’ve got to get across whatever it is we were trying to say as quickly and as visually as possible to compete against those other 11 agencies.

And so anytime somebody would show me slides with just paragraphs after paragraphs of text and just let me talk about the history of this, I just say, “I’m glad you spent all night writing that, but nobody’s going to read it.” That’s just the fact of the world we’re living in.

Maybe 200 years ago when we didn’t have TVs, computers and all these other distractions and this firehose of information, maybe somebody could sit down and read a 30-page report. But now we’re going to be skimming it.

Bob: Absolutely. You have clearly hit on something. I’ve always felt that no one has any responsibility to read anything you write. You’ve got to make it interesting. You’ve got to get it out and in front of them in a quicker way and as strong a way as you can.

Nolan:   Yeah. And I think the misconception sometimes is people think that they can’t deliver as much information with fewer words. To some extent, that’s true, but at least on a fast couple of passes, it’s absolutely false because how often does somebody actually sit down and edit, like serious do an edit to get rid of extraneous words and things on something they’ve written in business? It’s incredibly rare.

And so you can take a slide and if you have a ten-word header, I can almost guarantee you can get that header down to five words and still communicate the same thing. And that header is now 50 percent better, just this one small example.

Bob: What intrigues me about you, Nolan, is that you used to work in theater and performing. What did that teach you about communication? How does that tie into what you’re thinking these days?

Nolan:   Visual communication, for one thing, I was a theater director. You’re working with text, but it’s the director’s job to tell that story with other things that are not in the script. So the writer has done his or her job and he or she gives you the script, but then it’s your job to add costume in and design and movement and choreography and lighting and sounds, all those other things that help tell the story that are not textual.

Textual is very important, but it’s all these other visuals and cues that you need to give an audience. So that’s what I learned there.

I’ll also say too that actually, in college, I was in a writing program. We wrote screenplays and plays and TV episodes and things like that and I won’t say who, but a lot of my classmates now you can turn on TV at any time and see them. I will always remember this lesson from my screenwriting professor and she was just a stickler for formatting.

Meaning that if you had a bit of dialog on a page — this is for a screenplay — and you got to the bottom of it, she would mark you down and would not allow you to use continued to take that dialogue to go to the next page.

And it sounds like why not? Her reasoning was a few reasons; she wanted it visually to look right and to be easily read and scanned on a page, but also she said, “I will guarantee you 99.9 percent of the time if you get to that point, it will force you to go back to what you’ve written and say the exact same thing with fewer words.” And she was right.

There was almost never a time where I looked at a block of text and said, “Oh, I can say the exact same thing with fewer words.” And yet did. Because if you just let that sloppiness go, in this case, of sort of outside formatting, you don’t do that editing which is crucial.

Bob: It’s interesting and when you get into the whole less is more, PowerPoint is a great example of how less has to be more. You’ve got to communicate more with less. Why do you think it’s still so popular, PowerPoint, as a tool?

Yeah, some of that still goes on, but the vast majority of those writing formats have now transitioned to slides. Instead of somebody asking write me a memo on such and such or write me a whitepaper on this, it’s like give me a deck that explains such and such because they have less time to read that.

I would argue that a well laid out and a well designed print document can be read just as quickly and as effectively as slides, but we put that aside because to really do that you need to be a graphic designer. But slides allow you to communicate in little bits and chunks and to communicate much more visually for a non-designer.

So instead of writing three paragraphs on what the last quarter’s sales figures were, you can just put a chart on a slide and show it. Put a bar chart and like, “Oh, I got it.” The smart presentation creator knows that they probably don’t need much beyond that chart.

The less smart presentation creator will put the chart on and then write three or four paragraphs on top of it that explains exactly what’s going on in the chart and are redundant.

But it’s that little bits and pieces. It’s like each slide is a Facebook post, each bullet point is a tweet. It’s those little bits of chunks of information that is how we are digesting information these days. Slides are not the perfect format for it, but it’s on everyone’s desk.

Bob: Nolan, thank you for the great interview.